The Mysterious Affair at Styles

The Mysterious Affair at Styles (1920)

I must confess I’ve read the book years ago, and my little “grey” cells no longer contain much details… I am trying to keep up with Poirot abilities, but not succeeding . 🙂 I could just go to wikipedia, but what is the fun right? So I’ve decided to grab the book again…

So the last couple of days I gave a quick look into the book again and I have to say that it was a delight to read it again.
So fascinating, so amazingly clever, all the unexpected clues,, etc, etc.. Brilliantly  written!
Let me take you through my quick summary of the book, starting with a drawing from my daughter representing the “house of styles”. 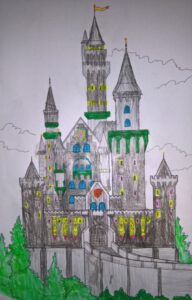 Captain Hastings arrives to at Styles

Hastings is invited by is friend Mr Cavendish (John) to spend some at time at Styles, the house which belonged to his father and now to Mrs Inglethorp, who married an “odious” person Mr Inglethorp.

Hastings describes that Mr Cavendish’s wife (Mary) is a very peculiar woman and at the same time beautiful and with an impressive presence. She is also very friendly to DR Bauerstein (a doctor who knows a lot about toxicology)

The house keeper Miss Howard(Evie) has a violent discussion with Mrs Inglethorp about his Husband who everybody hates. Evie decides to leave the house, and she warns Mr Hastings that a great danger exists while Mr Inglethorp is around. She  HATES Mr Inglethorp.

Mrs Inglethorp is very busy and tired with Charity tasks.

Cynthia ( Mrs Inglethorp protegee) , Hastings and Lawrence(johns’ brother) visit the hospital and she explains everything about the drugs being used there. When they are returning home, there is a first reference to POIROT, when Hasting sees him. Poirot is staying at a place provided by Mrs Inglethorp to Belgian refugees due to the war(1920)

Back to Style, the maid tells that there was huge fight/discussion between Mrs and Mr Inglethorp.

Mary Cavendish is also very agitated and Hastings hears  Mary and Mrs Inglethorp having a discussion.

After dinner on that day the tragedy happens: the description of Mrs Inglethorp symptoms, gestures and movements are sublime! At least the idea I’ve created in my head was absolutely and fantastically bizarre. If you re-read it, take a look on chapter 3.

Few questions and clues: Where is her husband? What is Dr Bauerstein doing in the surrounding so late in the evening?

Hastings wants to have Poirot investigating this…

Finally Poirot… Hastings meets Poirot at “ Belgium apartment”  and tells him what happened at Styles, while I enjoy all the peculiar things is being said about Poirot. And back to Styles Poirot will investigate the room where everything happened.

I’ve noticed that Hastings refers very often that Poirot might be old or that he’s not the same anymore because the Poirot’s logic is not that logic. But ya, that’s exactly what makes him the Best!

And actually how old would Poirot be in this first appearance of Agatha Christies’ books??

The investigation continues with many references to  “a” white powder, salt, coffee, Chocolate milk, etc…

Everybody thinks that the husband is the guilty one.

Miss Howard is back and accuses Mr Ingelthorp promptly!

The Farmacy assistant seeks Poirot to know if Strychnine was used… And Poirot finds strange that Mr Ingelthorp  uses black beard, glasses and strange clothes as everybody describes him!

Everybody is questioned and all went about Mr Ingelsthorp

Inspector Jaap is introduced and Poirot tells him to wait before taking Mr Ingelsthorp in custody.

Poirot gathers everybody at Styles and confront Mr Ingelsthorp with the situation and tells him that on that day he was having a walk with Mrs Reikes, so he has an alibi.

Hastings forgot to mention that Dr Bauerstein was at the house on that night with dirty clothes à Poirot gives extreme importance to this matter. Poirot confronts Miss Howard with the fact that her hate to Mr Ingelsthorp is blinding her for the reality…

Reference to a new analysis to the chocolate milk cup, and that there is bin on the attic with a “beard”…

Hastings hears a discussion between John and his wife.

Dr Bauerstein is proved to be a spy, but not guilty on this crime.

Small details (which I must confess I didn’t understand very well): Miss Howard finds some package papers above a closet, addressed to somebody with Cavendish name. Reference to somebody who came to fix he door bell…

Mrs Cavendish Tells the story of her life to Hastings.

Poirot proves that Lawrence was in the drugs room in the  Hospital and had the Strychnine bottle in his hands.

Poirot and the last leak

The hearing at the court shows a very weak case against John, as all the clues cannot be proved.

Poirot is very disturbed because the last leak is missing so he can  put the guilty person in jail : He starts building a “card castle” (very known write? I can already of David Suchet doing it … lol)

After a remark from Hastings he sees the light! There is a letter from Mr Inglethorp to Miss Howard. These 2 were in this crime together… And finally Poirot explains all: We all know the theatrical scene of having everybody together while he shines as the best detective of all times!